Children’s authors Jacqueline Wilson, Michael Morpurgo, Lauren Child and Cressida Cowell have announced that they will design BookBenches based on their own children’s books to be unveiled on the streets of London this summer. 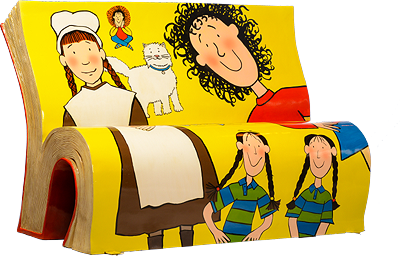 The benches, shaped as open books, will form part of a public art trail of 50 BookBenches launched for the National Literacy Trust’s ‘Books about Town’ project to celebrate London’s literary legacy and raise vital funds for literacy.

For the past few years we have introduced a new category to the award shortlist to raise the profile of genres not usually recognised by the Award shortlist.
In the past we have had the following special categories;


The Monster Sale by Brian Moses

Monsters that moan and groan and wail, Buy your monsters at the Monster Sale. Chickens who wear jumpers, all kinds of monsters, a puppy's favourite chews (a lucky dip of forgotten socks), staying awake waiting for your birthday, a bear in his underwear...


In his first collection for younger children, well-known poet Brian Moses has provided a funny and witty snapshot of family life, with a bit of fantasy added in.
Perfect for sharing at home or at school.

Funny, sad, silly, sing-along, the poems are about friends and families, pets and creatures, school, space travel - and more. There is something for everyone in this sparkling collection - with lots of action and joining in.


A brilliant and varied poetry collection suited to early years and key stage one aged childen from this distinguished children's poet.


WES MAGEE was born in Scotland, and worked as a teacher and head-teacher until he became a full-time writer twenty years ago. He has published 100 books for children, including poetry, picture books and storybooks. He regularly visits schools, libraries and festivals across the UK and abroad, performing his poetry show . He also runs training days for teachers, talks at educational conferences and runs writing workshops. His best-known books are The Very Best of Wes Magee, which won the Children's Poetry Bookshelf Award, The Boneyard Rap and The Witch's Brew. He lives in Yorkshire.


John Hegerty - I Am A Poetato

From A-Z - Alligator to The Dog Runs (Zoom) - John Hegley has a witty, surprising and always entertaining poem for every letter. Wonderfully varied, there are poems about people, pets and all kinds of other creatures. In each of them John Hegley brings insights by highlighting particular characteristics. G is for Guillemot, in which the poem gives a visual image of the precipitous world in which the bird lives as well as describing its life; Christmas Caterpillar surprises Santa while Quibble will set all readers on a circular and quibbling conversation about exactly what is being described. A terrific anthology for diving into again and again.
JOHN HEGLEY was born in north London and brought up in Luton. He now lives in Islington. He started out as a stand-up comedian/poet, performing his work on the festival and comedy circuit and he became something of a cult performer from the early 80s onwards. He has recently started to direct his writing and performances more towards children, but generally his shows will delight all ages. He plays the ukulele as part of his poetry performances. He is a Fellow of the English Association. John Hegley lives in north London.

Posted by Jennie Wilson at 11:58 AM No comments: